Unfortunately this restaurant is no longer open.

Smokey Ben’s BBQ and More in Yates Center, Kansas, “the hay capital of the world” is a rare gem on the prairie.   It is very unusual to find a barbecue restaurant in such a rural community, much less a good one!  Smokey Ben’s is Located on 54 highway, and is roughly half way between Fort Scott and Wichita.

If you like “fall off the bone” ribs, this place is for you.  In fact, their ribs are so tender that I’m curious how they get them on the plate in one piece.

My favorite thing about Smokey’ Bens BBQ and More is that the smoked flavor of their meat is spot on.  I took a peek out back and noticed that they accomplish this feat of barbecue mastery by using an old offset style wood burning smoker.  Most restaurants prefer to use highly automated commercial style smoker that much of the art and science (and smokey flavor) out of the process.  While the pit-master at Smokey Ben’s has more of a challenge on his hands, the results speak for themselves.

While visiting with a worker, I learned that everything on the menu is made in the smoker minus the cobbler (which looked delicious, but I was too full to try).

Smokey Ben’s BBQ and more is currently for sale.  I hope the next owner takes lessons from the current pitmaster!  I would encourage you to get to Yates Center soon and check it out.

The Neosho County seat community of Erie, Kansas is a pleasant and clean little community.  This riverside town is well kept and the people are friendly. One of the little community’s only real drawbacks is very limited amount of eating establishments. Food choices consist mostly of a bar, a gas station, a pizza and sandwich shop and a bowling alley.   While none of the aforementioned places are bad, I can say with confidence that there is another restaurant in the community that stands out in the pork department. 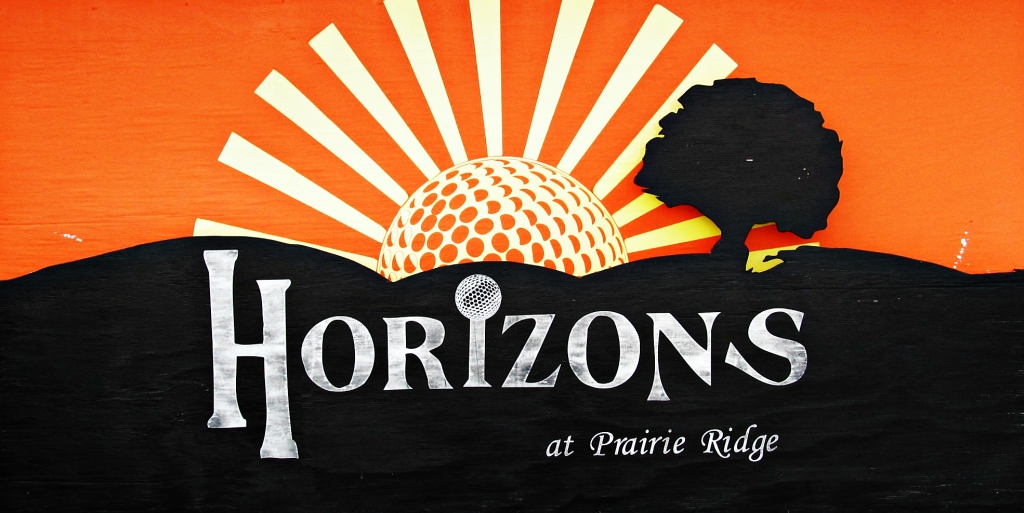 Horizon’s at Prairie Ridge, as the name implies, is a restaurant overlooking the local golf course. At the suggestion of a friend, I wondered in over the lunch hour one summer day for a burger. I was pleasantly surprised to see one of my favorite pork delicacies on the menu and quickly decided that I had to come back.  Fast forward to December, and my friend and I had the opportunity to return. 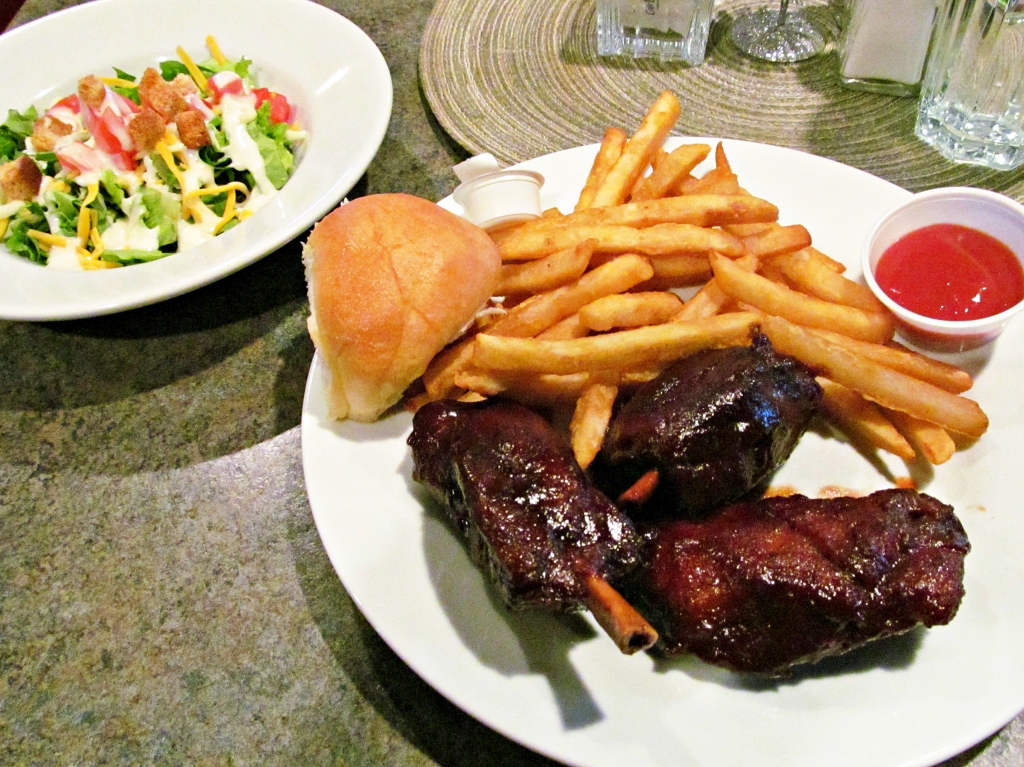 Although the cold weather kept us from eating on the patio and enjoying the lovely golf course view, the upscale interior provided a pleasant place to dine.  We called ahead and ordered the pork wings (actually, a tender and delicious piece of meat from the shank).  Only a handful of Kansas restaurants serve these tasty treats. (See the review of Taco Lucha in Manhattan for another.)  Our pork wings were served up with sticky barbecue sauce and a side of amazing battered French fries.  If you love pork like I do, you owe it to yourself to try some pork wings. You won’t be disappointed.

I don’t make a habit of eating at franchise restaurants, That being said I can’t resist barbecue whether it’s a chain or not. When I heard there was a new barbecue restaurant in Andover, Kansas, I had to give it a try. 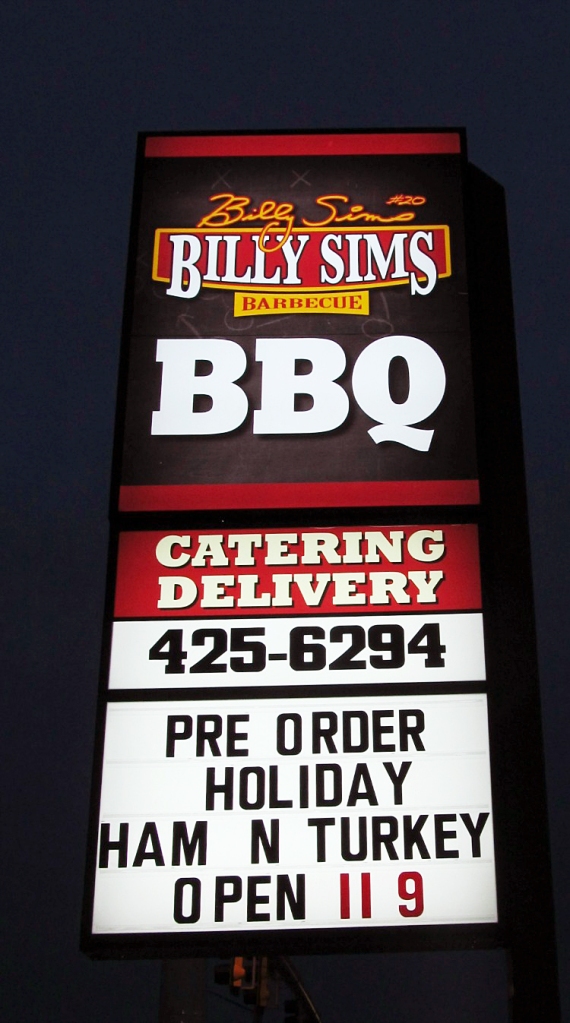 Billy Sims Barbecue is aptly named after former University of Oklahoma football player Billy Sims. As you would expect, the Oklahoma based franchise has a football theme.  The Andover location is situated in a once vacant corner gas station that has been remodeled to give the appearance and atmosphere of a typical barbecue restaurant.

There were a few good and bad points to this particular location and to the restaurant in general.  I’ll just throw it all out there. The Andover location is hard to get into. It sits on a corner where traffic only flows from one direction. After making a U-turn on 54 highway, I was able to turn around and get into the parking lot. I would also have liked to see more homemade sides. 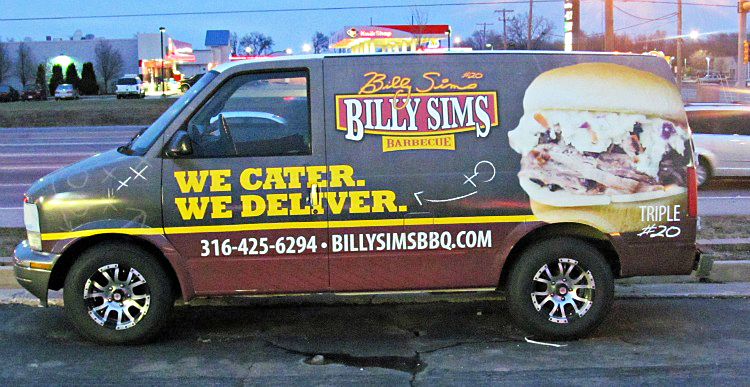 Now for the good. There is a large southern pride smoker located just behind the counter. The means to make good barbecue are present and the meat was pretty good. I would go so far to say that it was better than some (but not all) popular Kansas City restaurants. I could see that my ribs had an adequate amount of rub and they were served dry, as they should be, so I can sauce them myself. The sauce was similar to what many Kansas City restaurants offer. As you would expect from an Oklahoma based chain, bologna was on the menu. If you liked smoked bologna, it would be worth trying from a Billy Sims franchise.

Coincidentally, Billy Sims Barbecue was one of the many topics of discussion with the local farmers at the recently visited, Angelo’s Deli, which you can read about here on In Pursuit of Pork soon. Overall I prefer to support hometown businesses when I can, but as far as the barbecue meat is concerned, Billy Sims Barbecue certainly competes well.

After a recent move to Southeast Kansas, fellow blogger Mike, a southeast Kansas native, suggested a few places I should check out.  One of these places, Pallucca’s Meat Market and Deli is a real hidden gem.

Palluca’s is located in the back half of the old Pallucca and Sons Supermarket is located in downtown Frontenac.  Frontenac, Kansas, near Pittsburg,  is a town rich in Italian history, due primarily to the coal mining industry, once a large part of the area.

As the name suggest, they have a meat market full of fresh cut pork and homemade sausages, as well as a deli. I picked up a delicious homemade Cuban (with prosciutto rather than ham or pork loin) which I then brushed with olive oil, pan fried and ate for supper.

What the name does not suggest (but the smokers do) is that they also do catering. If that wasn’t enough, they also have a small grocery area full of imported Italian foods.  There are several varieties of olive oils, breads, pastas and anything else you would need to prepare a genuine Italian feast.  Many of these items available would be nearly impossible to find anyplace else in Kansas.

I can’t wait to check out some of the many varieties of flavorful sausages on my next visit. You should check them out too!