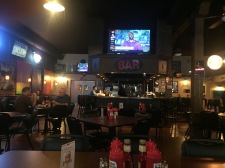 Bite Me BBQ, located at 132 N. St. Francis in downtown Wichita, was the location of a recent noontime meal prior to two days of business meetings. My good friend Keith and I checked out the place early on a weekday. The first thing we noticed was how big the place was, and how quickly it filled up. The lunch crowd obviously likes the place!

The expansive restaurant features a sports bar like atmosphere and a menu equally as expansive as the location. Obviously, I was there for the pork! I had the three meat combo with ribs, hotlink and pulled pork.

I thoroughly enjoyed the hotlink, and the seasoning and smoke of the ribs was spot on.  Their website claims that they have “… the biggest spare ribs you will ever see fall off the bone. Our ribs cook for 16 hours.”

Now, I will certainly agree to the size claim, however my ribs did not fall off the bone.  As they say in the barbecue cooking shows, the ribs had a “tough chew”… this is unfortunate, because they were some of the most flavorful ribs I’ve had in a long while!  If Bite Me BBQ can work on the tenderness aspect  of their ribs, I’d say they would have a fair shot of competing for their 2008 title again. It was certainly tasty enough that I will give them another try.