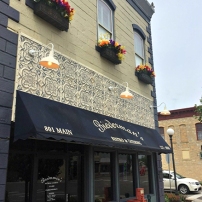 When asked what the best restaurant in Winfield is, many local residents will tell you that it is Biederman’s Bistro. The downtown restaurant, located in a building built in 1872 and remodeled into a restaurant space in 2004, is named after a pet turtle.

My visit took place during a busy Friday in April. The lunch crowd had filled the place nearly to capacity, and therefore service was a bit slow, but it was worth the wait. Everything looked and tasted as it was prepared fresh, rather than being quicker (but less tasty) food service fare.

I had a one of my favorite sandwiches, a Cuban. A Cuban is a pressed sandwich, featuring two types of pork, pickles, and cheese. What sets the Cuban sandwich at Biederman’s Bistro apart is that it features smoked pork, rather than the typical pork loin. The addition of smoked pork adds a flavor profile far above and beyond the average Cuban.

My meal also featured and appetizer of spicy fried pickles and concluded with a great slice of pie.

Winfield, Kansas has a handful of promising brand new restaurants that will have to work hard to serve pork as deliciously as Biedermans! I can’t wait to return to Winfield and see what the others offer my taste buds, as well.