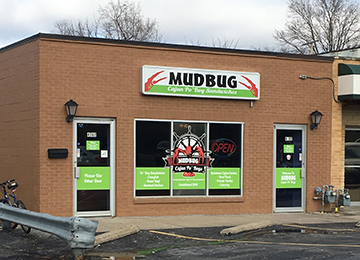 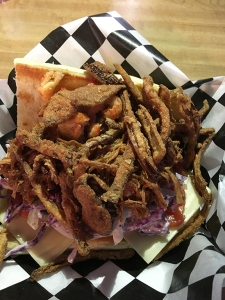 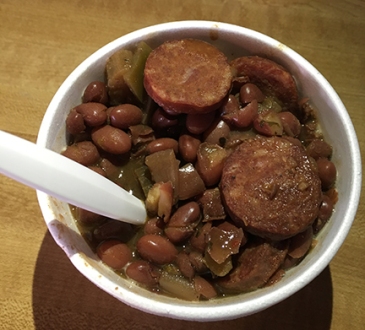 “Mudbug” is a slang term for a crayfish (commonly referred to as a crawdad, in Kansas).  A mudbug is actually not a fish, but a crustacean, similar to a lobster or a crab. These animals are commonly found in the southeastern portion of the U.S. and are the official state crustacean of the state of Louisiana.  As you might expect, the mudbug is a popular feature of Cajun culture.

A Po boy is a traditional Louisiana style sandwich on a baguette, and generally featuring some type of seafood. As homage to Kansas City’s barbecue roots, Mudbug’s serves up a phenomenal K.C. Po Boy featuring smoked pulled pork. This sandwich is a feast for the both the eyes and stomach.  The pulled pork has a hint of spicy Cajun seasoning rather than a more traditional barbecue seasoning.  The tiny bit of heat from the pulled pork pairs deliciously with the lemon pepper slaw, and fried union straws. The mixture of flavors work perfectly to create a taste not traditionally found in Kansas City cuisine.

If you love pulled pork but are searching for something different, I suggest you try the K.C. Po Boy from Mudbugs Cajun Po Boys. You won’t regret it!